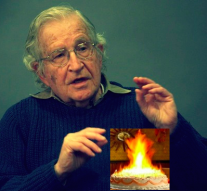 Noam Chomsky recently celebrated a half a century of being blacklisted by both liberal and conservative commercial media outlets, enjoying a black forest cake layered with cream cheese icing at a ceremony attended by more than two dozen of his admirers.

America’s most world-renowned political activist and intellectual, a rock star in virtually every European country except Venezuela, was first banned from appearing on network television back when only ABC, NBC and CBS were the sole purveyors of commercial TV news programming. Today’s cable news infotainers, including self-described intellectuals such as Chris Hayes, John Stewart, Lawrence O’Donnell and Rachel Maddow, and self-described Rain Anchors, such as Sean Hannity, Brett Bair, Bill O’Reilly and Megan Kelly, have adopted and continued the ban mandated by their predecessors.

“The problem with Chomsky is that he can’t give quick, superficial answers to five different important questions in three minutes,” said one anonymous MSNBC staffer named Brian Williams. “I mean, you ask him a question and he gives you some background history on the topic before answering the question, all the while citing the sources for the information he gives you and recommending articles and books to read if you want more information on the subject.”

“Chomsky is a disaster guest,” agrees FOX News automaton, Brit Hume. “He’s a journalist’s worst nightmare. I once saw him go over the allotted three minutes he was given by a PBS News Hour host by almost 90 seconds. I watched grown men cry in the production booth. I mean, who needs more than 180 seconds to discuss and explain the impact of NAFTA on the American economy?”

That Chomsky isn’t lightweight enough to provide perky sound bites for cable “news” infotainers is one of the main reasons he’s not welcome on TV. The reason he’s not allowed on TV is that he does not fully and 100 percent support the Israeli government in all of its policies, particularly regarding the country’s illegal settlements. That’s the big reason both liberal and conservative TV outlets don’t invite Chomsky. Disagreeing with Israel is verboten.

If you bring Noam Chomsky on your TV show, you lose your advertisers and then your show — and your broadcast career is pretty much gone.

Chomsky has not been completely absent from American media. He was recently interviewed by reporters from St. Francis high school’s Spartan Spirit, and earlier this year gave an interview on NPR’s All Things That Can Be Considered at 4:00 in the Morning. “I have been on Charlie Rose two or three times,” said Chomsky at his anniversary party, “but that doesn’t count because only my mom watched.”

The closest Chomsky has come to being on commercial media is his 2004 appearance on Real Time with Bill Maher, who actually said during Chomsky’s appearance, “I have never had a guy requested more of me in 12 years of doing two shows. I swear to God.” Speaking to Chomsky, Maher said, “I’m not kidding. Over the last 12 years, on three different networks, people, especially young kids, request you. When I first did it, I didn’t even know who you were.”

How the fuck does Bill Maher not know who Noam Chomsky is?

That’s how significant this ban is.

Commercial media (including newspapers like the New York Times and Washington Post), have kept the American people from hearing their leading intellectual for half a century. This is the first and only time liberal and conservative talk radio, TV news and newspapers have all worked together toward a common goal.

If you don’t believe this is true, read this story about the time an NPR host was forced to play music for five minutes instead of airing an interview she had taped with Chomsky. Just before the interview was about to air, NPR executives got wind of it, called the host and forbade her from airing Chomsky’s words – even though the execs had not even heard what Chomsky had said.

In fairness to the TV anchors, it’s kind of hard to interview a guy who, when asked what he thinks about Green Bay’s playoff chances, rails against the U.S. government’s involvement with El Salvadoran death squads for 20 minutes. But that’s not why Bill Maher hasn’t had his most-requested guest back 13 years later. Bill got a phone call from his network employers.

At age 84, Chomsky doesn’t believe he’ll last another 50 years living in the mainstream media shadows, but has set a goal before he dies of getting on MSNBC and CNN at least 2 percent of the time Sarah Palin does. “I can see Russia from my telescope,” said Chomsky, “which should qualify me to be seen as intellectually legitimate as Michelle Bachmann or Corey Lewandowski to the two liberal networks’ news anchors.”