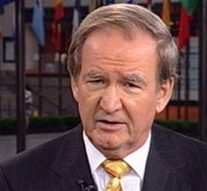 TV journeyman political pundit Pat Buchanan recently turned down an opportunity to co-host an hour-long nightly news show on the FOX Network with Sean Hannity, apparently miffed at the network’s plan to call the show, Hannity & Comb Over.

FOX, under fire for retreating from its pledge to be fair and balanced by allowing its irate Irishman to appear nightly without a co-host, had planned to tout the new show’s even-handedness by pairing a commentator from the far right with a co-host holding views from left field.

“I’m glad it didn’t happen,” said Morning Joe co-host, Joe Scarborough. “We’d have had to replace him on our show with Glenn Beck, and he’d make Mika cry every other day.”