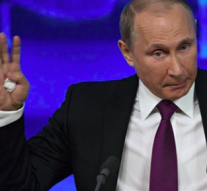 Citing a cough due to cold, Russian premiere Vladimir Putin admitted it was he who was hacking during a recent media conference call, continually clearing his throat and horching while reporters on the call threw up a little in their mouths listening to the live phlegm streaming.

“I couldn’t help it,” said Putin, who apologized for not admitting to the hacking earlier. “You know how cold it is in this country? And I can’t wear a hat when I go out because they say it looks weak. Thanks Kennedy.”

Putin was apparently forced to come clean about his hacking after the photo above showed the telltale Kleenex he used.

Russia initially denied Putin was responsible for any of the hacking clearly heard by Western reporters, blaming the coughing on the Chinese. “Obviously one of them had just had some egg drop soup. You know how slimy that stuff is.”