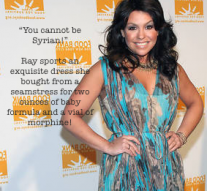 As a gesture of international goodwill, president Donald Trump ordered the U.S. State Department to allow culinary gadfly Rachel Ray to film an episode of “$40 a Day” in Aleppo, Syria. The show is intended to show Westerners how to take advantage of extraordinary food bargains in that country, The Food Network announced this week.

“There are some amazing opportunities in Syria right now,” said Ray, who’s show normally takes viewers on tours of U.S. cities, showing them where they can eat breakfast, lunch and dinner for less than $40.

“In Aleppo, you can literally walk into shops, delis, food markets and restaurants and pay nothing,” she said. “Many store owners are not even there, and some of the restaurants don’t even have front walls on them. You can walk in and just, like, take whatever you want!”

Ray points out that viewers can stretch their budgets even further in Aleppo by selling the extra items they can’t eat. “We were able to sell five-day-old bread we found in an empty bakery for $200 a loaf! It was stupid!,” said Ray.

“We also brought back some really cute old paintings and sculptures we found in a nearby museum.”

The episode will air later this month on The Food Channel after Emeril Lagasse’s, “Katrina Leftovers” special.