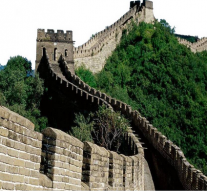 Getting tough on trade with China, President Donald Trump announced today that the Chinese government will pay for maintenance of the Great Wall of China.

Trump made the declaration while speaking to a group of Chinese-American business leaders during a visit to San Francisco’s China Town. “We are fed up with American jobs going to China and I will demand that the Chinese use their Great Wall to keep U.S. citizens from entering the country to work,” said Trump to enthusiastic chants of “Buird that warr! Buird that warr!”

“If there’s one thing I know, it’s construction,” said Trump. “That wall is crumbling in some places. You can see boulders literally lying on the ground. It’s like no one’s worked on that wall for hundreds of years,” he said.

Issuing a response to the American leader’s statements, Chinese foreign minister, Wang Yi, stated, “We respect president Trump’s desire for fair trade practices, but we have no idea what he is talking about.”