Home / This Week / Trump sworn in: thanks Putin, lazy Blacks in address 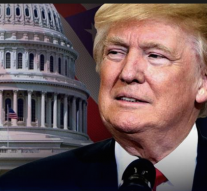 Giving shout-outs to Russian hackers and “the millions of coloreds who stayed home on election day,” Donald J. Trump gave his first address to a divided nation as the 45th president of the United States of America.

“In the words of a great American, John Snow, let me tell you, winter has come!,” said Trump to dozens of cheering supporters. “It’s time to make America great again, and when the world-class team I have put together figures out what that means, I promise you, we will make it happen! And we will make it happen big league. Whether it’s the NFL, NBA or MLB, I’m not sure, but it will be as big as one of those leagues. Maybe the PGA. But probably not Major League Baseball, because it’s the offseason for them right now. How about that Aaron Rodgers, by the way?”

Trump continued to pound his familiar campaign themes during his address, specifically referencing the question he asked of African-Americans during his campaign. “I asked The Blacks, ‘What the Hell have you got to lose?’ Well, countless numbers of you stayed home, ensuring my election, so let me tell you what you’re now going to lose. Number one, your health insurance. Number two, funding of your children’s schools. We’ve got a great lady, Betsy DeVos, who’s going to make sure of that. She’s a terrific lady. She hates public school families and her family invented the pyramid scheme, so they know a little something about something. Number three, your food stamps. Let’s face it, you people are leading the nation in obesity and I’m going to help end that. And you’ll be beautiful again and you’ll thank me for it. Number four, any spots on my cabinet. Ben Carson is black, but with a lower-case ‘b,’ so he doesn’t count. And he’s a beautiful man who’s going to fix your housing, although you’re going to lose that, too. I learned great things about keeping Blacks out of housing from my father, and we settled all of those federal lawsuits without admitting any wrongdoing. Finally, number five, and not really finally because you’re going to lose a lot more, but five, you’re going to lose any serious investigations into police shootings because we need to make our inner cities blue again. And not blue like sad, but blue like a sparkling night sky filled with a thousand points of lights. Which resemble tracers.”

Trump went on to address his other campaign promises. “During my campaign, I said I would build a wall along the Mexican border and have the Mexican government pay for it, ban Muslims from entering the United States, deport 11 million Mexicans, put a 45 percent tariff on Chinese goods, safeguard Medicare, repeal the Affordable Care Act, put Hillary Clinton in jail, keep Washington insiders out of my administration and release my taxes.

“Many in he liberal media said that I was incapable of listening to criticism, of learning from experienced politicians, and evolving as a leader, but I can tell you they were wrong. After spending eight weeks as president-elect, I have listened, learned and evolved, and I have changed my positions on all of those campaign promises. Take that Rachel Maddow. Who is fat.”

“I also promise to…hey, could someone shut that baby up? That one, over there. Man, in the old days, we could just have someone punch that kid out. Although…is that your kid? Wow, damn lady. You can breastfeed right now. I don’t mind. Anyway, where was I? Oh, I promise to use my not-small hands to grab Lady Liberty and bring back American jobs. And I mean real jobs, not like the waiter jobs at Mara Lago, or the painting work I have done on my real estate properties and don’t pay for. I mean real jobs, where Americans can see beautiful new countries like Malaysia and Taiwan as they take these new career opportunities over there. And they are beautiful opportunities and countries. And large jobs, like my hands.”

Trump addressed few other specifics in his address and spent the remainder of his words thanking the various constituency (whites) who put him into office. After leaving the dais to chants of “Build that WalMart!,” Trump took his family to Denny’s to claim in his senior president discount.

Trump’s first day in the oval office will be highlighted by visits from various state leaders who bring gifts representing their countries’ cultures, as well as secretly recorded videos of previous Trump visits on their smart phones.