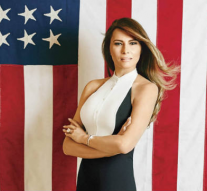 Donald Trump says his administration has proof that the First Lady of the United States was not born in America and that she cannot produce a birth certificate proving she is a natural-born citizen.

Trump said he first became suspicious when his wife celebrated her eighteenth 29th birthday and he asked her for some ID. “I mean, come on, our kid’s 10 years old and I married Melania after her fourth 29th birthday. Something’s up.”

A spokesperson for Melania Trump refused to comment on the allegations that the First Lady was not born in the United States, saying, “Kaj je ta tip govori?”

Some legal scholars question whether Mrs. Trump actually needs to have been born in the United States to fulfill her role. “According to my reading of the U.S. Constitution, the First Lady of the United States only has to be a female with at least 130 pairs of shoes and the ability to smile blankly in public without looking at her watch,” said FOX News commentator and legal analyst Judge Andrew Napolitano.

The latest accusation by the president follows a recent incident which saw the first lady temporarily banned from re-entering the U.S. after a shopping trip to a Middle East country.