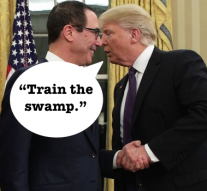 Promising the largest tax cut in history, the Trump administration will seek to lower the corporate tax rate from 35 percent to 20 percent.

To make up for the shortfall in revenue the tax cut will create, U.S. Treasury Secretary Steve Mnuchin announced that the United States will have to sell at least four states to pay for the multi-trillion dollar deficit the tax cut would create.

“While everyone loves and respects smaller states like Delaware, Rhode Island, Maine and New Hampshire, we really can’t afford to keep them and pay for the necessary tax cuts, infrastructure improvements and defense budget increase this country needs,” said Mnuchin. “These four states have really been great for 200-some years, but they aren’t major contributors to our economy or culture,” he continued, pointing out, “None of these states even has a single professional team in a major sport. I mean, you’d think Maine would at least have a hockey team.”

Acting as a pitchman for the sale, President Trump stated, “As a real estate expert, I can tell you that these states are really great, really huge buys and can provide an owner with lots of natural resources and hard-working white people for decades to come,” he said.

Asked if a better plan for helping reduce the deficit and raise revenues would be to require the 26 Fortune 500 companies that don’t pay any income tax each year, Trump said, “Taxing those companies would cripple the government because these businesses, along with the many other profitable U.S. companies that pay an effective annual corporate income tax rate of 12.4 percent, are responsible for funding the election campaigns of countless, hard-working white male Senators and Representatives. Without these tax-deductible write-offs, U.S. Congress members would need to meet with voters face-to-face in order to campaign.”

Maine, New Hampshire and Rhode Island could not be reached for comment, but Delaware expressed alarm and dismay at the proposal. “What the fuck, why is Idaho not being sold? They’ve got, like, 300 people and 800 sheep,” said Delaware. “We were the first state to join the union. Or why not sell one of those states that tried to secede? This is bullshit!”