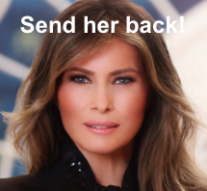 Aware that the first lady is not interested in living in the White House another four years and that Baron = billions, Donald Trump’s lawyers are looking at various strategies to extricate him from his current marriage, according to sources inside the administration. Options include a reverse presidential pardon, deportation and revocation of her Tiffany’s charge account.

“There is no truth to the completely false rumors that the president and first lady are planning on splitting his fortune 50/50 any time in the near future,” said Trump Organization spokesperson Salvatore “Big Tuna” Gnocchi.

“The president’s relationship with the first lady is as strong as its been since she hit 35 years old and he met Stormy Daniels. The president has only requested copies of Mrs. Trump’s citizenship papers and tax returns for a Christmas collage he is making as a surprise gift this year.

“And by the way, we have proof she doesn’t have a U.S. birth certificate.”

The first lady’s office responded with a press release that stated, “Get moose and squirrel.”